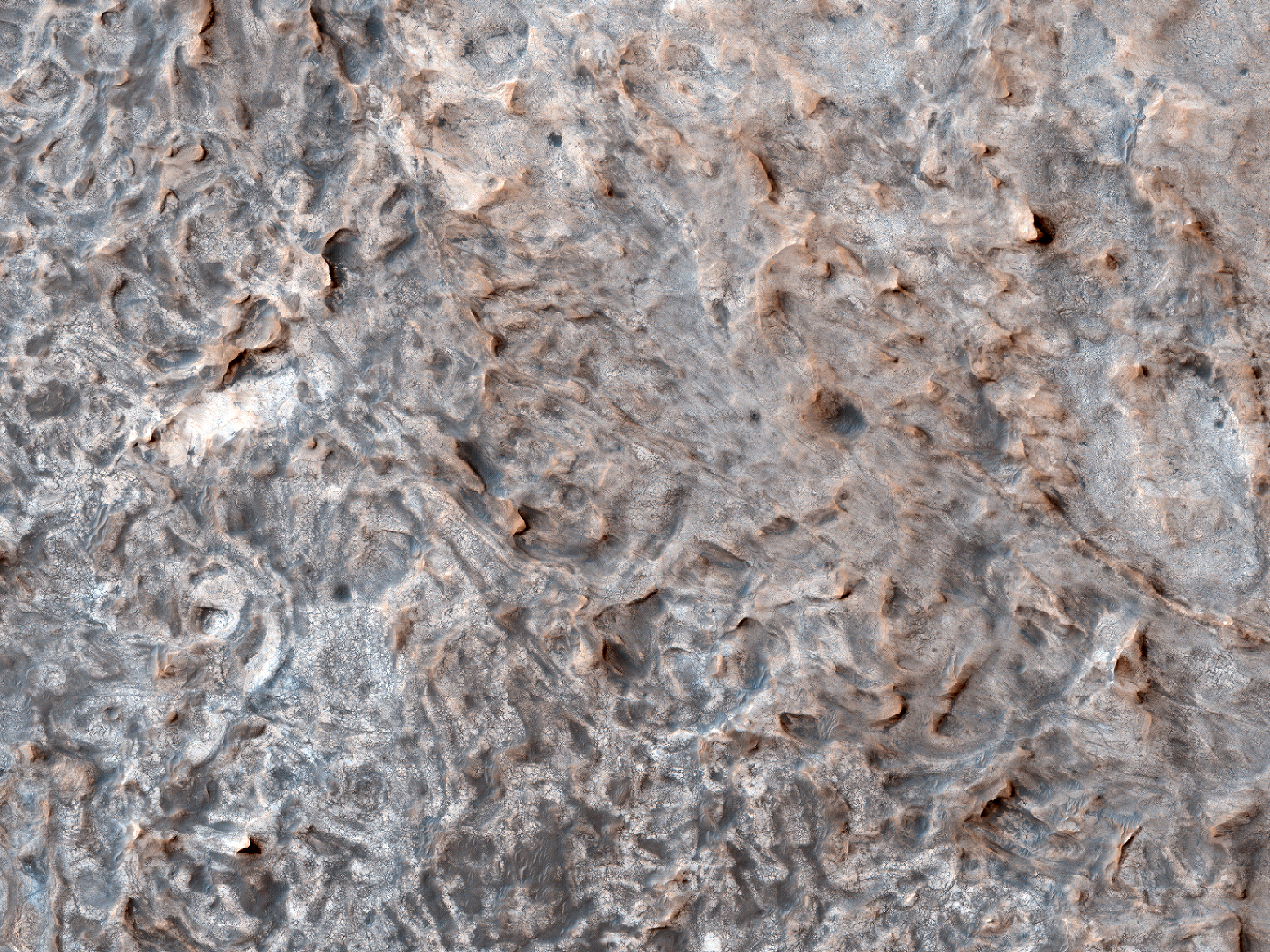 Light-Toned Rocks in Terra Meridiani
This observation shows part of a broad expanse of bare rock in Terra Meridiani. This is a large area with abundant sedimentary rocks forming a stack hundreds of meters thick, and now being eroded into a landscape reminiscent of the southwestern United States.

The timescale involved in depositing and eroding these layers is evident from the remnant impact craters preserved here. The large arc in the image is the rim of one crater; the smaller, circular dark spots are traces of other impacts. Light sediments are found both inside and outside the large crater, indicating that this crater formed during the period of sediment deposition. It is likely that this depression, which was probably more than a kilometer deep when it formed, was completely filled and buried and is now being exhumed. Crater densities are often used to estimate the age of surfaces on Mars, but here the rate of erosion is enough to erase small craters, reducing the apparent age of the surface. These rocks probably date from an early era of Martian history, but no fresh, pristine craters are visible.

The smaller circular patches are also impact craters seen somewhere in a complex cycle of burial and erosion. They are filled with dark material which probably mantled the region at one point, most likely after all of the light material was deposited. In some places this appears to have been hardened into rock, as in the large dark circle in the north-central part of the image. Material eroded from this hardened mantle may now be forming the ripples seen in many places as it is blown by the wind; the color of the ripples is similar to the slabs of dark mantle.

At the finest scale, the light sediments are intricately textured. A diverse assortment of fine cracks called joints are visible. The scale and density of these joints varies across the image; this suggests variations in the properties of the rocks. Although the image as a whole is a relatively flat plain, at small scale the surface is intricately rough. The balance between erosion and rock strength has left a surface with many small knobs, mesas, cliffs, and bumpy textures.

Further evidence for the diversity of rocks here comes from the enhanced color. The dark mantling materials are generally blue in the RGB color image while the sediments are generally pale, but a diverse range of hues indicates variations in the composition (or in the amount of sand and dust trapped on the surface by textures of varying roughness). This helps to highlight layering and shows which rocks are most similar to each other.